It has been a long time coming! But after about a year of scraping together funds and reaching into our own pockets. We now have much needed new computers! 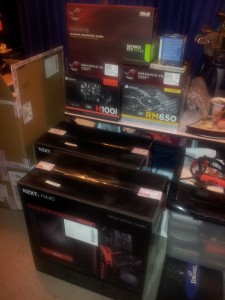 Our previous computers, one was a store bought “general” performance computer (WHY?!) and the other an 8 year old high performance (at the time) computer. Both were showing signs of age despite regular maintenance.

They were also not playing very nice. The store bought one would take anywhere from 5 to 15 minutes to start up, and the other would constantly run out of storage space. They would also generate a large amount of heat even at idle, overheating to the point of shutdown, or BSOD-ing at really inappropriate times. And in a country which can have 30C to 40C days in Summer, it would be worse! (It’s summer in Australia right now).

We also have a feeling the old computers may have also be sentient, acting peculiarly worse when researching new computer parts or even discussing new computers in their vicinity. One even blue screened resulting in an unsaved parts list disappearing… HMMmmm *suspicious looking around*.

But that is now a thing of the past.

After getting all the parts, Alex spent a couple days last week putting them together, installing software and testing them out. They are now fully operational and ready to go. Both are also very cool, in temperature and appeal. 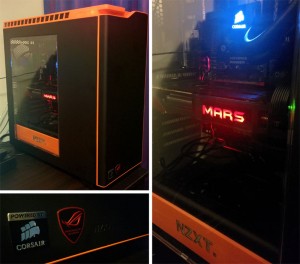 These new computers will be aiding us in development, allowing us to improve the quality of our games, and experiment more freely with visual effects, art and tech.

We are still likely to develop games on a single computer for a while, as we still gather funds to acquire additional licenses for software, but we’re well on our way to having a better development environment then previously.

Here are the specifications for those that are interested.

For anyone looking to build a new computer for game development, we recommend that you give yourself a budget, research the parts yourself and come up with multiple builds. DON’T buy store bought ones even if it’s within your budget and has the parts you want, because the odds are it is likely not to last as long or perform as expected. And always buy alternative cooling for your CPU, don’t use stock.