Amongst the panic and madness of last month, and the continued madness considering it’s already 1/3 of the way into March already, I managed to get a few things done.

Our new game is moving along nicely and now has a basic level editor! 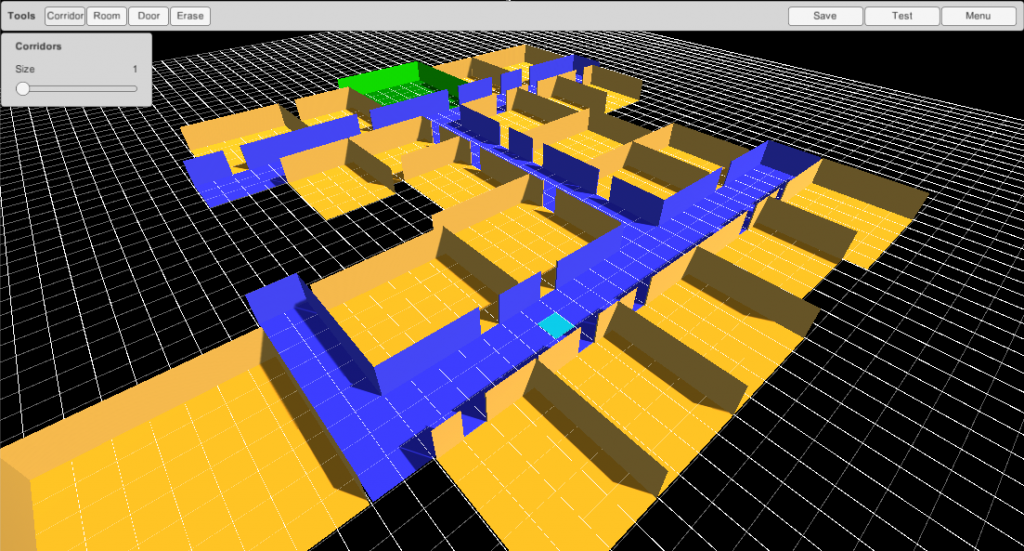 The level editor lets you design the layout. The rest is taken care of when you test/play the level.

This past week, I’ve been setting up a kind of floor plan editor in-game to help with creating and testing levels. It was relatively easy to set up because the levels are procedurally filled when they are loaded, limiting what the editor needs to do to just rooms and corridors. Doing it this way means from a single floor plan, different challenges and content can be generated into the level to create different experiences every time you play.

Our hopes with this is to eventually allow people to design their own levels to encourage aspiring developers or enthusiastic gamers to come up with their own unique levels, which focus more on the design and flow of a level without worrying to much about all the other details. The bonus of this method is that it creates re-playability for not only the players of those levels, but also the creator. 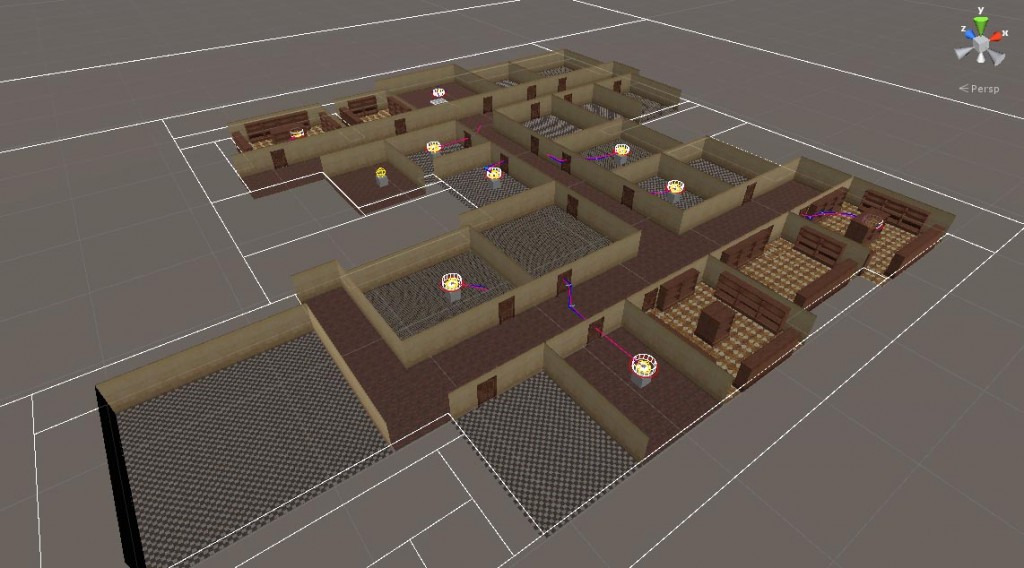 The same level after it has been loaded and filled with a few things.

It is also the first small, and most simple we could come up with, step in the direction of understanding and developing tools for user generated content.

The AI System (PoliteAI) has also had some significant refinements to it, making it a lot easier to work with. The goal with the AI is to create a single creature which reads the environment and chooses the best action to take based on that info. Resulting in what is called emergent AI. Basically you give it the abilities, and based on what it has seen or heard, it decides what to do.

The real challenge is going to be in generating useful information (stimuli) into levels procedurally, to help it make it’s decisions. And with the prospect of users being able to create their own levels, this is probably going to be a tricky task. If that ends up proving way too challenging it may end up just coming down to limiting how the AI interacts with the player and some good use of “smoke and mirrors” to create interesting gameplay.

So far the basic game is there, it just needs a lot more art and a heck of a lot more AI code.

The biggest milestone for the month was the new website. It’s been a long time coming and one of the things I’ve wanted to change for over a year now. The old design was basically a blog which didn’t support what the majority of visitors were coming to the site for. Most of the traffic seemed to be looking for very specific pages, i.e The Very Organized Thief’s game page. With only a few sticking around to keep up to date with all the latest happenings.

So with that in mind, the redesign was to provide information and news to an audience that came here for a very specific thing, and letting them leave with a little more information then they originally came here for. All the game pages now contain the latest news from the blog relating to that game, a long with additional facts and info related to the game. It’s still missing a few other things that I’ll hopefully be adding later this year, to reflect new updates and releases, but right now that isn’t exactly useful since there isn’t much updates happening to our games just yet. 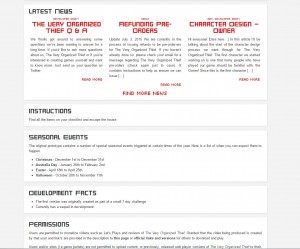 Some of the new information that can be found on the Game Info pages.

Their is also a new front page, if you didn’t notice (it’s kind of hard to miss), which should help with new visitors looking for us directly. It’s laid out to provide a good summary of all the latest news and the most recent games we’ve released.

There’s still a few fixes and tweaks to be made. And some things are also likely to change as we add more content to the website. But the site feels a whole lot better and is becoming a better home for everything we’re doing. It’s also great to have finally rolled out something new.

Hopefully we can keep up this pace in the coming months!