The last month has been a complete blur. With our current project moving along, a new look for the website about to be launched and a whole heap of other things written down on large quantities of post-it notes. I haven’t had much time to actually write one of these things for a while, amongst the coding, designing, business related stuff, the occasional 3D model, and plenty of new things to learn. It has been a very productive time.

And I figure, it might be a good idea to summarise what we’ve been working on this last month to keep you all up to date.

So what’s been happening? 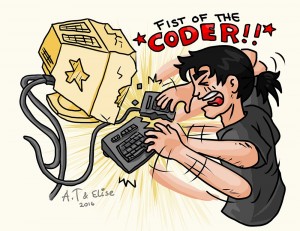 The current project is doing well. We’re working on a re-imagining of what we attempted in July last year (2015). Taking everything we’ve learnt from then up until now, and putting it together into something that will hopefully be an interesting and unique experience for people to play. And yes, it is a horror game!

Why a horror game? It’s been done to death! In terms of a project and scope within the genre we’re currently developing for, it’s just the right size to not get completely out of hand. The focus is going to be on using everything we currently have and creating something that has relatively solid and enjoyable game-play. 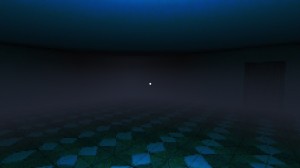 It is also a major test of everything I’ve coded in Unity up to this point. Putting it through a full production cycle to tease out any issues and improve things. So keeping the scope small means less headaches, and a higher chance of the game being completed.

The overall goal is to test what we have, try something new, get it done and sell it on a number of online marketplaces to be better acquainted with that process. Currently there is no estimated time for release, but with a number of pieces of tech being signed off on in the last few months we should be able to create a game quicker than normal.

Early last month, I spent a fair bit of time getting the new AI system ready for use in production. The new AI system is called “Polite”, and is a Goal Oriented Action Planning, or GOAP, system. Last year I spent a significant amount of time researching and testing out various AI systems. I ended up going with GOAP because it simplified some problems I’ve been trying to solve with our previous system, while letting me re-apply what I created for our old system back into the new one.

One of the largest parts of the last month has been learning, and coding, ways to create levels procedurally to help us speed up the level design and visualization process. Being just a team of 2, designing and creating levels takes a long time, and coming up with ways to help us explore and experiment with levels has been pretty important. 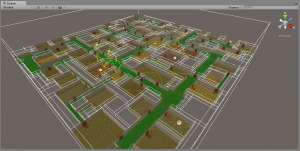 Initially created using a “tunneling” algorithm. The map data was then manipulated to create interesting areas and features.

And so far, it’s working! Things have been moving much faster than normal. Being able to experiment with levels by tweaking parameters and using a modular approach to art has let us test out more ideas without the need for spending hours or even days making adjustments to a “hand” modelled level. The process has been pretty enjoyable.

The tool-kit itself is based on what I learnt from working on The Maze – Keeper of Doom. Taking the ideas that worked and coming up with something a little more flexible for us to use. The long term goals is to eventually have a system we can use to help us create levels of various shapes and sizes, for both design purposes and randomly generated levels in game.

I’ve also been working on a new look for the website that is coming in the next week or so. This is to help support some of the new things we have planned, and have been doing, making things a little easier for people visiting. It’s a lot more modern and clean, attempting to strike a balance between something that looks relatively professional with something that still feels kind of indie. 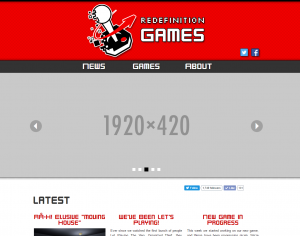 There’s also been some mobile and TVOThief web version developments going on. But I might save that for another time.

And that’s been my last month or so.

Oh. And caffeine. Lot’s and lot’s of caffeine.