Throughout the months of developing The Very Organized Thief, a question would always come up, “Can’t we do more, by doing something simpler?”. And it was a question that would often leave us frustrated, that we could never answer.

Before we made the previous post, we’d been working on changing our development strategy to hopefully help Redefinition Games grow and move in a better direction. This change should allow us to create more smaller titles for everyone to play, as well as new content for everyone to consume. 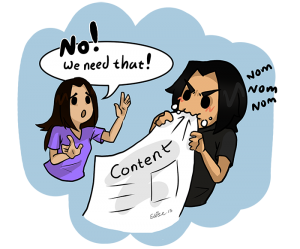 In the last few years of development, the goal with a lot of our games is based around what we want the player to feel and experience at a given moment, wrapped up in good game play. TVOThief was essentially a proof of concept for us, taking everything we knew at that point and jamming it into a small game.

From the very beginning we wanted to prioritise development around creating small games, to help us fund the development of a larger title. But along the way, we were pushed off that path, and went spiralling down the rabbit hole that has been TVOThief.

So this month, we’re creating a completely new game which we are going to keep nice and small. It’s going to be scary, because we’ve always wanted to make one (and TVOThief was never meant to be scary) and most importantly, it should be fun. The goal is to jam it out in a month, using what we’ve currently developed as a way of refining it and putting it to the test through play. 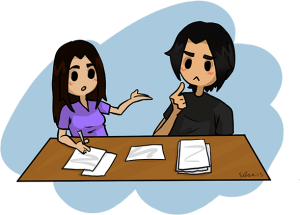 There’s usually more paper than this.

Why a month? For a short period of time, Elise and Alex are both on point for full-time development. After that, it’s back to just Alex… 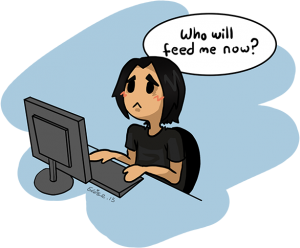 “I’m sensing a recurring theme with Elise’s drawings. But I’m not quite sure what it is…” ~Alex

We’re also taking this opportunity to bring some of what we have to mobile. With the loss of Unity Web Player on Chrome, and Unity WebGL not exactly ideal for the types of games we’d like to create. Making a move to mobile makes sense, and is something we’ve been wanting to do for a while.

On top of that, VIDEOS! COMICS! And a whole bunch of other things we felt blocked from attempting and releasing. You can also expect more developer diaries with behind the scenes developments and sneak peeks of our new game as we begin to work on it.

We hope everyone is excited about the new changes and is looking forward to what we have to offer in the coming month/s. And as always, we hope you continue to enjoy playing our games.

To be clear, we love The Very Organized Thief. We often play it ourselves, and love seeing peoples reactions and responses to the game. Throughout development we’ve been extremely excited about where the game has been going even after cutting it back in scope to make it do-able.

But unfortunately, to create it, developing a game of that scope was still outside of what we’re capable of doing given our current circumstances.

And as much as we’d love to make TVOThief happen as soon as possible for everyone and ourselves. We need to spend time away from it, in order to build up to it, so we can actually make it happen.

We are still working on it. Everything we’re doing over the coming months will be contributing and refining the development of code, visual effects and art style currently in use on the new TVOThief, as well as other planned titles ; )

If you’d like to know more, please read our previous post which explains a few things in more detail.

:D hello!
Its nice to know you 2 still working ;)
cant wait to the game!