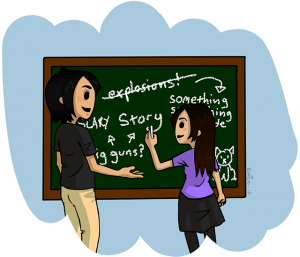 So our aim for this game is kind of similar to what the original TVOThief had going for itself. Tension. Except this time, we’re going to intentionally use that tension to scare the player by creating horror.

TVOThief was never originally intended to scare people, but people still found it terrifying. So we want to take what we’ve learnt from TVOThief, and apply it to something that is literally scary.

We’ve been talking about creating a horror game for a while because we’ve been wanting to explore the genre a little more, primarily for the type of story telling that can be created.

It also fits well with what we’ve already developed, code wise, in Unity.

We’re hoping to keep the game play simple so people can jump right into the game, which is less about jump scares and more about anticipating bad things to hopefully create a better mix of tension and horror.

We’ll also be exploring a number of visual techniques we’d like to try through programming, modelling and texturing as we develop the game.

Alex is fond of PSX era graphics, which is the visual style we’re hoping to imitate. That “almost” imprecise kind of glitch-y effect that you often see when playing 3D games on PSX. He’ll be talking more about that in a later developer diary, probably in the next few days. Mostly on the technical programmer side of things.

Elise has been working on concept art. Fleshing out the art style and direction while experimenting with different texturing effects. Looking at PSX games and seeing what might look best. She’ll be showing off more about that in another developer diary.

And that’s a little bit of what you can expect. We hope you’re looking forward to those upcoming developer diaries for some sneak peaks.