It’s been a busy two weeks as we plan, design, code and do arty things to get everything ready for our next big step and beyond!

We’ve been reworking the original house making the house up to the same quality as the sneak peak we showed a few months ago.

Elise has been modelling some new props for the house and the new levels we’ll be doing. She’s also been drawing some pixel paintings to be hung up on the walls on various levels. 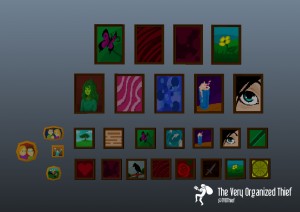 Alex has been rebuilding a number of systems to allow the game to handle some new features that have been planned. The original gameplay is all there with the only exception being to the AI which is currently going through another update to allow us to do more things. 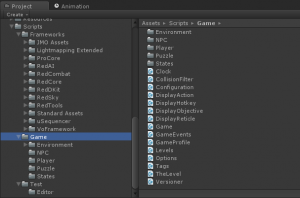 All the tools and libraries of code we’re currently using. “Red” and “Vo” are our code frameworks.

Compared to the original version, the time it took to jam it out over 7 days has been longer (to put it mildly). Turning it into something much larger has required us to be much more methodical, making sure all the things we hope to do is possible to ensure that the game actually gets completed.

This whole process has also been pretty challenging as a lot of the work is done on a single computer, where we take turns at certain times of the week.

For the first half of the week Alex does Unity work, constructing the levels, placing new props and programming everything to make it work. We also spend a lot of time talking design and what we could do to make things a little more interesting and challenging for players.

The second half of the week the computer is occupied by Elise, modelling new props in Maya and painting new textures, ensuring that it fits into the existing style. During this time we talk business about what we intend to do with The Very Organized Thief and how we hope to do it.

(We also spend a lot time freaking out!)

It’s not exactly an ideal situation, but progress is being made. Part of our plan is to hopefully change that through some kind of funding which will help us acquire additional software licenses. It might be kickstarter, but it’s likely to be something else.

We’ve been looking into alternative ways to fund development, which has required us to write up a fair few business-y documents. We’ve been trying to answer the question, “do we really need to do a kickstarter?” and evaluating what else we can do. The resulting side affect of learning the alternatives has made it difficult to make a decision as to what we should do. You can chop this indecision down to us being methodical and in-experienced in this area. But we can say we are leaning to one side more the other.

But regardless of what funding model we go with, our ultimate goal in the end is whatever decision we make The Very Organized Thief still gets made and everyone gets to play it. Which is the most important thing. Whatever that decision ends up being, we’ll be sure to let everyone know. So expect some announcements!

We’d also like to say “Thank You!” to everyone who has been asking us questions on ask.fm. Although we haven’t answered some of them, we appreciate every single one. If you did ask us a question and didn’t receive an answer, it’s likely we want to keep some things a surprise! ; )

you have already done it so its not a big job but could i request a Halloween mode, the one that you used at Halloween this year, its way more scary. -tristan

The Halloween mode will only be accessible around Halloween. As much as people do enjoy being scared in the Halloween edition, our game is not fully intended to scare people.

Adding such a mode to the new version will also require a substantial amount of work and IS a big job for a small team with few resources.

Various modes are planned, however the core game experience with additional levels is currently our highest priority.