Now this is really late!

Last month I spent time on refining our combat system, adding new features to give us better control and solving a few problems around using an IK System. The goal being to let the player be able to see their entire body whilst performing actions, like shooting. Because a number of our future projects are also first person, being able to do that in a way that looks good and is done simply, is pretty important. 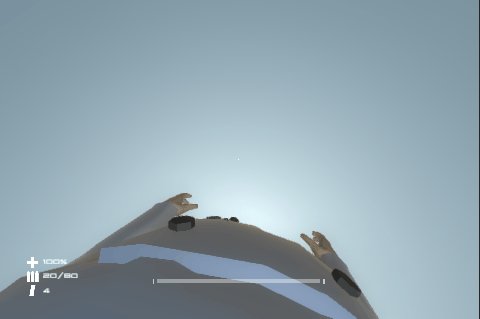 You can see your body!

I also made some changes to how levels are generated. After a bit of playing around with the combat system in levels created using our editor, we decided to change how levels were generated to serve the gameplay better. The original levels defined a floor plan, which we would then fill procedurally with props and obstacles at runtime. This process is what we are using on our survival horror game and seems to fit the gameplay pretty well. But for an action game, not so much. It didn’t feel right. Parts of the levels felt boring and tedious to move through and filling some of these areas with obstacles would not of been possible, at least not with out more code then it really needed.

So I ended up coming up with a mix of two of our previous games, The Maze – Keeper Of Doom and Chance. Creating a simplified pre-defined layout of rooms which are interconnected in a maze like fashion, and then filling it with appropriate challenges. Something of which would of not been easily done without our new “engine”. The same concept as the levels created in the editor, but with less arbitrary boring space between. And so far it feels a lot better but it still needs a bit of work and tweaking to get it just right. 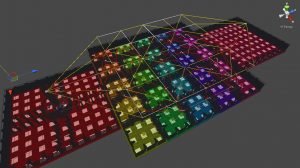 Maze like series of rooms. The lines and colors are used to determine what difficulty level obstacles and challenges are likely to be placed in those rooms. (WIP)

The bonus to this layout is that it is simpler to scale up and add more rooms. It’s also easier to optimize to keep the game running at a smooth frame rate. And procedurally filling it with obstacles is a little more controlled and manageable.

Our goal with using procedural generation is to NOT create totally randomly generated levels, but to create variations in play inside a familiar space which has then been enhanced procedurally. Something of which we feel The Very Organized Thief does really well, but largely by accident. Finding that balance between controlled design and chance, has been hard to get just right requiring a lot of experimentation and trial and error. But is now something of which we have a very strong understanding of.

And that’s just some of the things I was working on last month. Expect more soon!