In this article I’ll be talking about the start of the character design process we went through for The Very Organized Thief.

The first character we started working on is one that many people who have played our game should be familiar with, the Owner! Since this is the first character we wanted to design and model, we went through many iterations to get the tone and style of the character. This was fairly important because it’s the style we’ll be using for the other characters we’ll be creating during development. 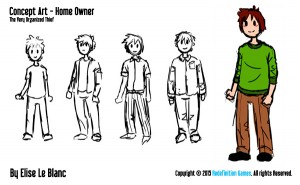 Some early concept designs of the Owner

In the original prototype many people mistook the Owner for a woman, and although I loved the confusion, we decided to make his gender a bit more obvious. I drew many sketches trying to get the new design of the Owner just right, which Alex provided advice and input with. 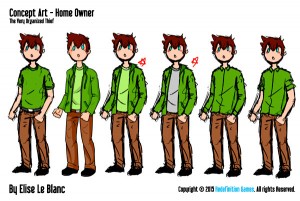 Once we were happy with the new look, I drew a T-pose drawing, which you can see below. 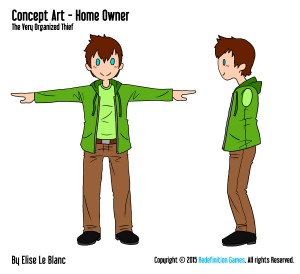 The final concept design for the Owner

From this Alex created the 3D model of the Owner using Maya! 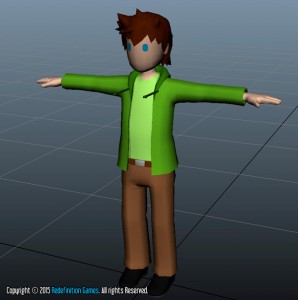 The Owner model in 3D!

He then rigged it to be used with the animations, and set it up in Unity with the new AI system and a number of other things. Alex will hopefully talk about that in a later post. :) 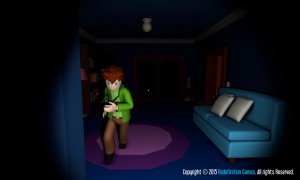 Here is the owner in game. He’s chasing you!

Because of the number of iterations we went through it took quite a long time, but after all the effort we’re very happy with the results!

We have other character designs we’ll be showing off in later posts, so I hope you’re looking forward to that and enjoyed this little sneak peak. :)