It’s been a while and keeping people up to date with news has been a little challenging considering Elise and I (Alex) have been studying. We’re currently in our final year of studies and our class workload is annoyingly heavy at the moment. Throw in some part time work and booting some other projects into the open and things as you can imagine are pretty chaotic!

But we’ve managed to create a bit of extra time to start writing a Developer Diary! To hopefully keep everyone up to date with the development progress of The Very Organized Thief.

So the original version of The Very Organized Thief is pretty much duct taped together. Being bashed out over a 7 day period which then had features glued on over several months. It is now quite the mess, and a big headache to make new changes in. We also weren’t studying at the time which gave us the freedom to go all out and try a bunch of different things we hadn’t tried before. 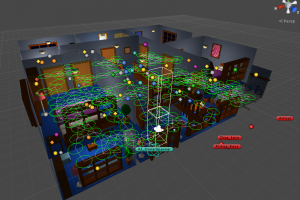 At the moment, we’re keeping work on that version to a minimum. Fixing what we can without adding to much workload on top, so we can have more time to work on more important things, such as the new version!

For the last 2 months, we’ve been rebuilding The Very Organized Thief from the ground up. Looking at the original game as a base and coming up with ways to do things better, more flexibly and hopefully speed up the development process. Since time has become a precious commodity for us, finding ways to speed things up is pretty important.

We ended up doing a number of experiments in The Maze – Keeper Of Doom. Testing out a number of unknowns and optimization techniques to do with assets and mesh data. 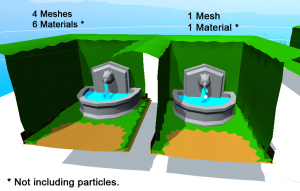 It was also a testbed for our improved AI system. Although the AI does behave the same as the Owner, it was done with half the amount of code making it a little easier and more manageable for us to do increasingly complicated things.

The new project also has an improved asset pipeline using Unity’s AssetPostprocessor (which is awesomely fantastic!). We’ve taken the repetitive tasks, mostly to do with optimization and organization of an asset, and automated it. This is super neat for small team like us since it has free’d up time to allow us to focus on developing the art and creating the game.

We’ve also been building additional tools using Unity’s Editor GUI customization, to help us with the creation and management of game specific items. Some tools are still in development, but we’re working on some tools to hopefully give us better control and feedback over randomizing objects in the scene. Random locations are currently done “by hand”, which is relatively problematic due to the number of items we’re potentially going to be moving about with additional levels. So we’ve been coming up with a solution to make that less tedious to hopefully let us add more random locations and make finding items even more challenging.

We’ll hopefully talk more about the above in detail in future developer diaries. 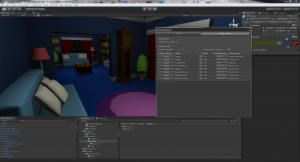