So I’ve decided to take part in the Indie Vs Gamers Jam!

For a long time I’ve wanted to take part in a Game Jam, but always found myself too busy to really take part in one or I was caught up in something which wouldn’t really allow for it. It was really annoying, because I’d always come across a Game Jam, get excited by it and then turn to Elise and say “wouldn’t it be cool if we made a game like this!”. We’d often end up talking about what the game could be in kind of a free-4-all verbal game design session.

And as fun as it was doing that, it kind of sucked because those ideas never materialized into a game.

For the last year, that feeling has been there all the time. Holding ourselves back to focus on one thing, which overtime accumulated more problems around it then we could really deal with. Not so much in terms of developing it, but more from the limitations of the environment we currently live in and sorting out problems which happened naturally over the years with TVOThief. It reached a point where it was impossible for 2 people to handle.

And the worst part of it all was we felt we couldn’t express the ideas we wanted to create. Like we had built some kind of wall in front of our creativity to keep us working on something which needed the thing behind that wall.

Something had to change.

So part of the changes that we’ve been making is to help break down that wall and tap into our creativity again. And from what I’ve seen, there’s nothing more creative then a Game Jam! 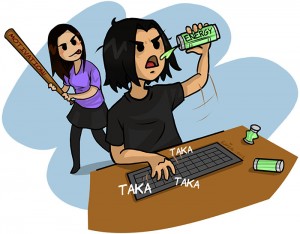 The source of my motivation is energy drinks and Elise with a baseball bat.

Sooo… while Elise continues to work on art for our spooky game and dispense motivation. I’ll be throwing myself into the fray getting no sleep, powering up on energy drinks and hopefully staying alive to create something fun, and hopefully cohesive, for everyone to play in the Indie Vs Gamers Jam!

And best of luck to everyone participating in the Indie Vs Gamers Jam! I can’t wait to see what everyone comes up with!!